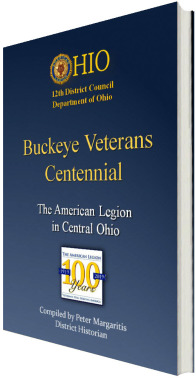 In early March, 2019, a new book detailing the history of the American Legion Ohio 12th District Council was released. Entitled Buckeye Veterans Centennial and compiled by our Post 798's Commander, Pete Margaritis (who is also the district historian), it chronicles the district’s development from 1919 to 2019.

12th District Council has in various configurations existed in Central Ohio for the last century. During those years, the many officers who have served in it have striven hard to maintain and pursue the basic ideals of The American Legion, centered on our four pillars. Those thousands of men and women who are or were once part of this proud organization have endeavored to strengthen and encourage it through their plans and activities. Throughout the years, they have created a rich tradition of service and commitment to the Columbus area, especially to our veterans, our children, and community members who have dwelled in that area.  Hundreds of thousands of hours of dedicated hard work have been freely given to further those American Legion elements decided upon a century ago.

At times it has not been easy. Often serious roadblocks and issues challenged their efforts. Still, the 12th District Council persevered, and today, well into the 21st Century, it still stands as a pillar to the community, as well as a distinguished honorable instrument of progress, a formidable presence, and a dedicated veteran ally.

The book is currently out of print, but can be purchased through the 12th District Council for only $15.00.

By the way, author Margaritis will autograph your copy for free.

On August 2, 2017 a book co-written by Post 798's Commander, Pete Margaritis was released. Entitled Twenty-Two on Peleliu, it chronicles the remarkable World War II memoirs of an “Old Breed” Marine. The book depicts the very unusual life of a recently passed local veteran celebrity, George Peto of Columbus, Ohio, as told to the post commander, who is a prominent military author. In a collaborative effort recorded through 14 months of interviews, George recalled in detail to Cdr. Margaritis the exciting elements of his fascinating life.

In February, 2021, the book will be re-released as a paperback. It can be purchased online at any book outlet (Amazon, Barnes and Noble, etc.) or directly from the publisher, Casemate Publishing (See link)
https://www.casematepublishers.com/subject-categories/world-war-ii/pacific-theater/twenty-two-on-peleliu.html#.X_OYAmOSm70

Growing up in the Great Depression, the adventures of this happy-go-lucky kid, like an early day Forrest Gump, touched on so many unique facets of American history in the 20th Century. From gazing up at early dirigibles in Akron, Ohio during the Great Depression, to fishing and trapping on the Erie Canal not far from a gangster’s hideout, to working in the CCC out West. And his experiences in World War II as a forward observer for a heavy mortar team were even more memorable as he fought in four famous Pacific campaigns with an elite unit: The First Marines. Even after the war, George seldom had a dull moment, once fighting for what he believed right up to the Supreme Court (and he WON). Yes, George Peto was an extraordinary individual and lived a life more exciting than any four normal individuals. This is the story of a true Marine.

The book, published by Casemate, is available through any major book outlet, including Amazon, Barnes & Noble, and Google Books.

By the way, Cdr. Margaritis will autograph your copy for free.

If you want to read an interesting interview Casemate Publishing did with our post commander/author, follow this link:
https://thecasemateblog.wordpress.com/2017/08/11/meet-peter-margaritis-co-author-of-twenty-two-on-peleliu/ 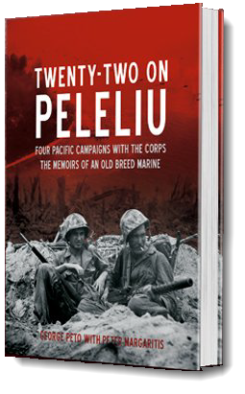 (Below: Sgt. George Peto showing Cdr. Margaritis photos
of him in his Thirties. Taken August 9th, 2015.) 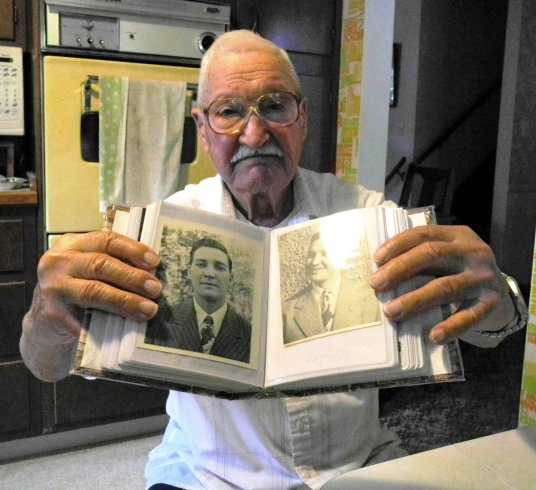 In November 2018, another book on military history written by Post 798's Commander, Pete Margaritis was released. Entitled Landing in Hell, it chronicles the Peleliu invasion in World War II.

On September 15, 1944, with the Allied winning the war, the United States invaded a tiny lobster claw-shaped island named Peleliu, only 450 miles southeast of the Philippines and 650 miles north of New Guinea. The island group lay right in the path of the main line of the American advance eastward. Bypassing them would leave a communications and logistical threat to their left flank. The Pacific High Command believed that taking Peleliu was needed as a prelude to General Douglas MacArthur’s long-awaited liberation of the Philippines.

If Peleliu were taken, it could become a major airbase from which the Americans could mount massive bomber campaigns against the Philippines and eventually against Japanese home islands.

The main amphibious assault would be made by the famed First Marine Division under Maj.-Gen. William Rupertus. Confident in his men and his plan, he was sure this operation would be over quickly, and resistance would be initially moderate but brief. He boasted that they would be victorious in just three days. Allied planners agreed, convinced that the landing would be fairly easy, that the Japanese defending the island were relatively weak and unprepared, and that it would all be over in just a few days.

They were drastically wrong on all counts.

This book analyzes in detail the many things that went wrong to make these casualties so excessive, and in doing so, correct several earlier accounts of the campaign.

The book, published by Casemate, is available through any major book outlet, including Amazon, Barnes & Noble, and Google Books.

By the way, Cdr. Margaritis will autograph your copy for free.

Other books written by the commander include: 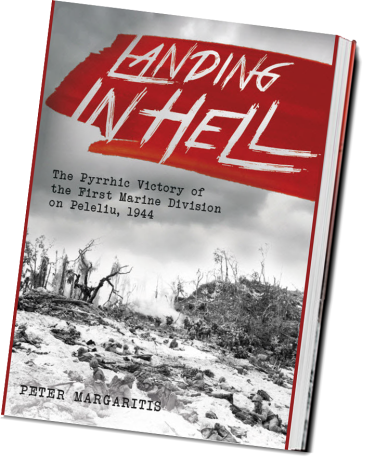 The next regularly scheduled monthly post meeting (2nd Thursday each month) will be on Thursday, September 8th, at 1130 hrs. The meeting location will be as usual in the banquet Hall of the F.O.E. Eagles Club, 1623 Brice Rd, Reynoldsburg, Ohio,
(614) 861-9073.